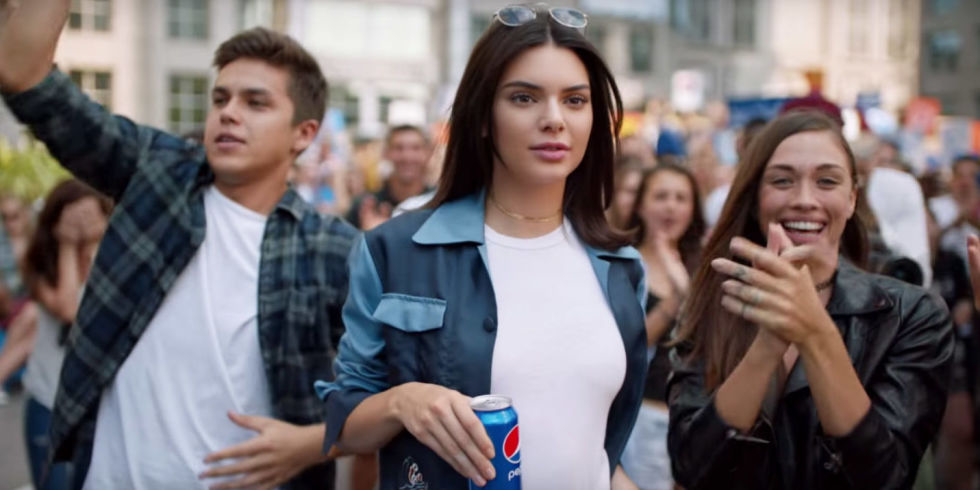 Zuma, Syria, Trump, Gordhan. It’s been an exhausting week in politics, but what’s been happening in the advertising business? From Kendall’s kerfuffle to Domino’s search for world domination, here’s volume 1 of our new series: This Week in News. 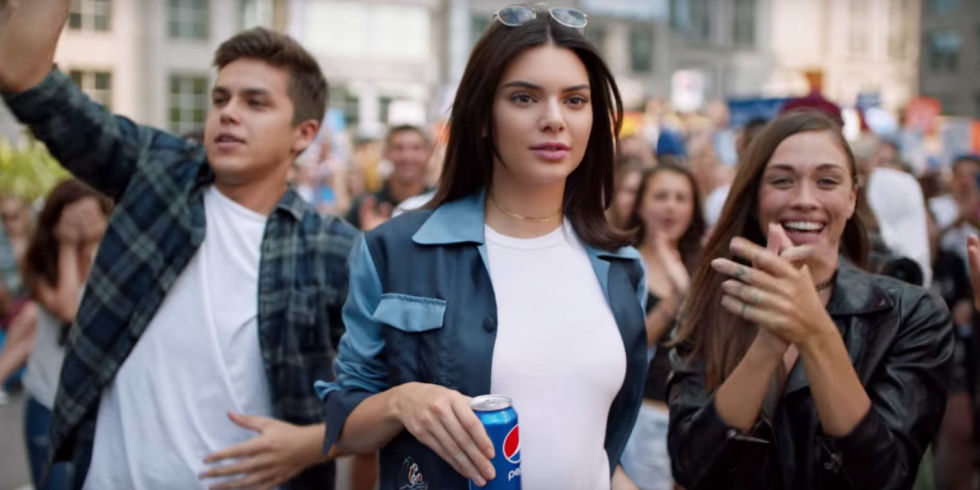 Offensive? No. Racist? No. Sexist? No. The only thing wrong with Pepsi’s new ad is that it’s so eye-rolling, so insufferable and a piece of advertising that some experts are calling the worst ever made. .

In it, the soda company’s new pin-up Kendall Jenner spends the early part of her day flaunting it for the cameras before happening upon a protest on the streets of a nameless city somewhere in the world. Hippie signs are scrawled across placards and held aloft. For a protest, it’s all very tame, very Gen-Y.

K whips off her blonde wig, runs a clenched fist over her lipstick (in a move eerily reminiscent of Ronda Rousey’s don’t be perfect Reebok spot) and gets stuck in.

Of course, there’s a bucket of ice-cold Pepsis lying around and so the good Jenner plucks one from its water bath. But instead of drinking it, she decides to make a show of unity with the cops watching the protest, and gives one to a smiling cop, who thanks her by taking a giant swig!

Check out The Independent‘s scathing, scene-by-scene analysis, which includes the ad itself. 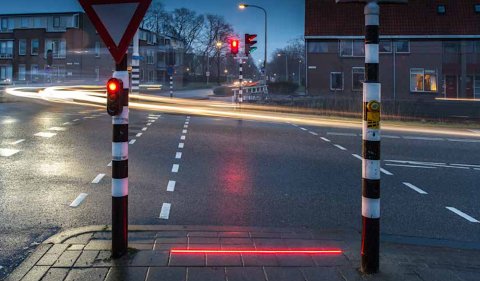 Ever a bastion of progressiveness, our friends in Holland have decided that since all of humanity is addicted to their cell phone (and spends the majority of the day glued to them), pedestrians are in danger of walking into a wall of traffic. The town of Bodegraven has come up with a solution.

As per Business Week:

“[The town] has put strip lights in the floor at a pedestrian crossing — meaning people who stare at their phones all day will see them, preventing them from wandering dangerously into traffic.”

A good idea, or a waste of taxpayers’ money? Sound off.

The Drum’s reporting that Domino’s Pizza has lofty goals in mind: to make audiences love pizza as much as they have loved their smartphones in the past.

They’ve hired creative agency VCCP to help the brand not only become more omnipresent, but more powerful in its messaging. TV remains a key consideration, but you can expect VCCP to embrace emerging platforms too. Digital, as ever, will be key.

Domino’s is the UK’s leading pizza brand due in part to innovative marketing in the past. The Drum reports on some of its key campaigns:

“Over the last year, much of [Domino’s success] has come from online orders, spurred by a number of innovations including a specially equipped delivery car with on-board cooker, an autonomous delivery robot, drone deliveries, a Facebook Messenger bot and a Facebook Live auction. The stunts have helped the company significantly increase its online orders which have contributed to an 11.5% overall sales growth on last year to £237m, from £212.6m.” 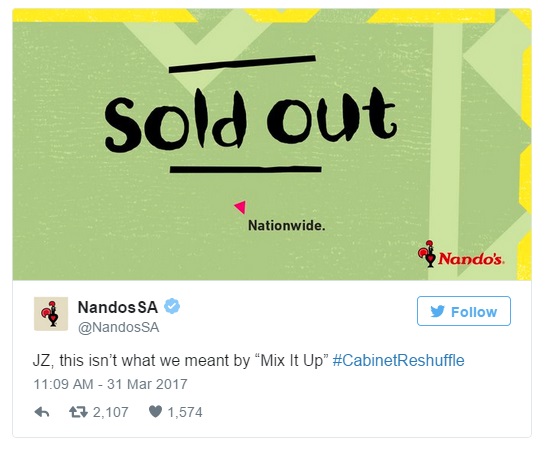 Staying with the food-related theme, one of South Africa’s biggest brand exports – Nando’s – has been typically on point this week, releasing an ad ridiculing Zuma and the cabinet reshuffle that saw popular Finance Minister Pravin Gordhan lose his amidst a sea of controversy.

Nando’s goes with the simple phrase: “Sold out – nationwide.” An accompanying tweet elaborates: “JZ, this isn’t what we meant by ‘Mix It Up.'”

That’s it for this week. See you next Friday for another reality check from the world of advertising!